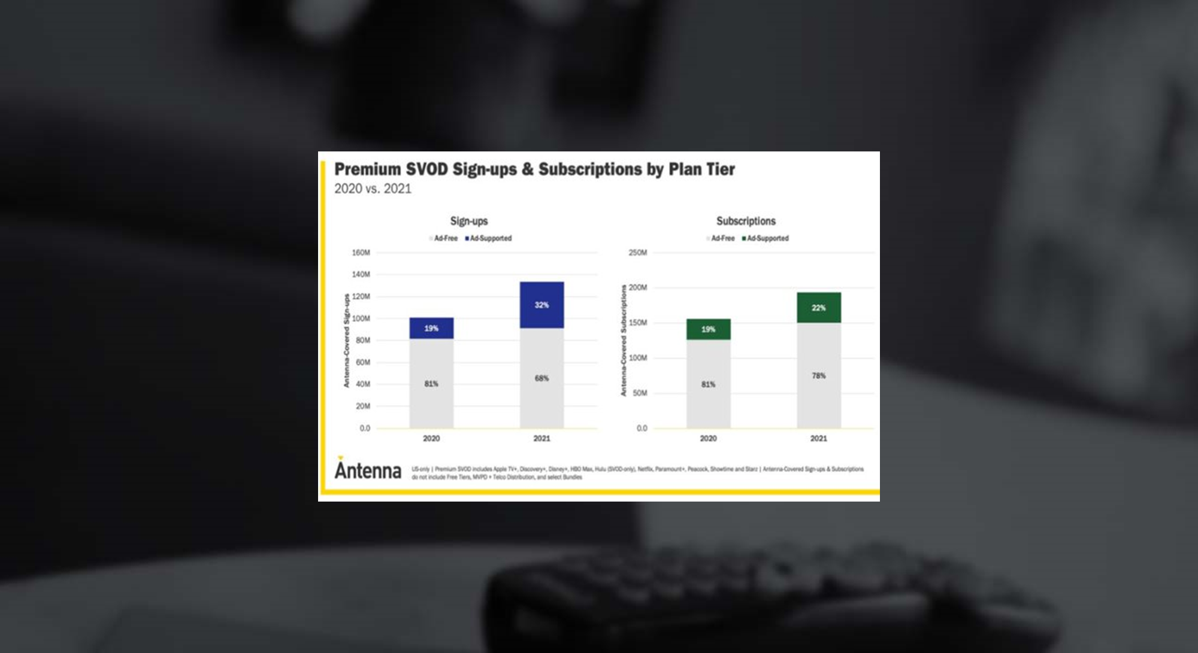 According to research company, Antenna, “consumer sign-ups for the lower-cost ad-supported tiers of five major premium subscription-based video-on-demand (SVOD) services totaled 42.2 million in 2021.” Included in the report were Discovery+, HBO Max, Hulu, Paramount+ and Peacock’s reduced-cost tier (not its free tier). This is a 117% increase over 2020 when sign-ups totaled 19.4 million (where Paramount+ was tracked as CBS All Access before the relaunch). Ad-supported tiers represent 32% of total premium SVOD sign-ups in 2021, versus just 19% in 2020”.  (MediaPost; 3/11/22)

In other streaming news, a survey by Samsung Ads indicates subscriber volatility with larger platforms faring better than the small-to-mid-sized players. Overall, 2021 saw a slight increase in the “retained user percentage” among those who used their apps for two consecutive months; up to 44.8% in 2021 from 42.3% in the 4th quarter of 2020. However, the largest streamers (Samsung calls them “tier 1”) had a retention rate of 63.6%. Conversely, churn rates (the percentage of subscriber loss) are also “steepening, now at an average of 50% across all streaming apps.” (up from under 45.9% in 4th quarter 2020.) According to the report, the churn rate among the largest streamers is only 19.4% (MediaPost; 11/15/22)

The 2022-23 syndicated TV season is coming into focus with the announcement of two new talk shows.   “Fox and Hearst Television have picked up The Jennifer Hudson Show from Warner Bros. and Debmar-Mercury’s Sherri, starring  Sherri Shepherd, will take the time slots of Wendy Williams, the host of which is battling medical problems.” Debmar also announced the cancellation of the Nick Cannon show. NBCUniversal’s Karamo Brown, from Queer Eye, is expected to air on CW affiliates and other stations in the fall. Also coming back is Drew Barrymore (season 3), from CBS, which averaged a 0.6 household rating. “Next year, the show will be split into two half-hours, which stations can run back to back or separately. CBS-owned stations will pair Drew with local news in top markets and air the second half-hour on its duopoly stations, sources said.” (NextTV; 3/14/22)

As more households cut the cable cord, emarketer forecasts that fewer than 50% of them will have a traditional pay TV subscription by the end of next year. The anticipated drop, from 68.5 million to 65.1 million households represents a 4.8% decrease. This decline comes after the loss of 50 million pay TV homes between 2016 and 2021, with the steepest drop in 2020 at 7.7%.  Beyond the chart, look for the continued rise of vMVPD, as more cord-cutting households will turn to such services as Hulu + Live TV and YouTube TV. By the end of 2022, 15.0 million households will subscribe to a vMVPD, up 7.6% from 2021 and representing 11.4% of all US households.(eMarketer: 3/15/22)

Interest in “the Big Dance is back to pre-pandemic levels”, according to a new report by CivicScience. Further, those planning to follow the tournament “somewhat closely” are above pre-pandemic levels, while those answering “not closely at all” are declining fast. CivicScience postulates that these responses may be an extension of the trend that there’s been a “big jump in sports in a post-pandemic world” that may also be the result of the “rise of sports betting.” The return to work in an office, and the opportunity to compete against coworkers has shown a similar rise in tournament pool participation. Additionally, this growing interest builds off of the steady growth seen across NCAA men’s basketball. One new trend is the increase in viewership of the women’s tournament; driven largely by younger men. Adults 18-24, in fact, “demonstrate a higher likelihood to “very” or “somewhat closely” follow the women’s tournament, rather than the men’s.” (CivicScience: 3/14/22)