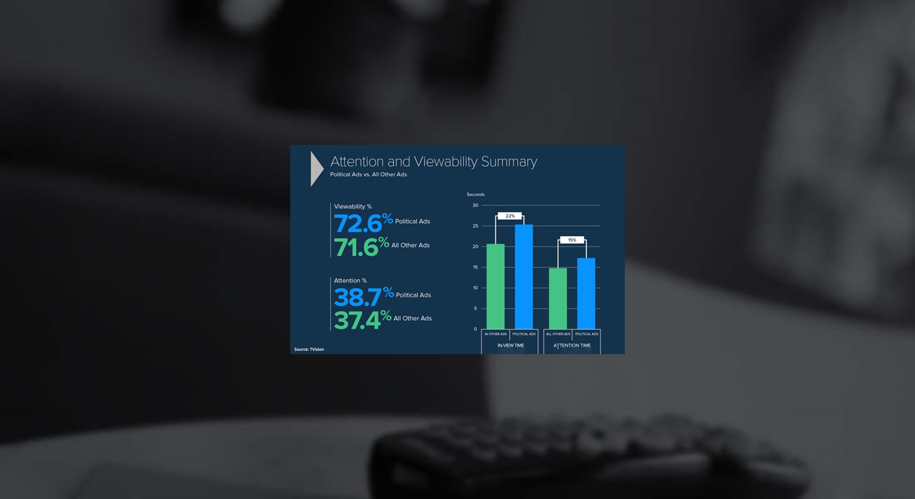 THE MOST SHIPPED SMART TVS

Research company Omdia, found that “shipments of smart TVs powered by Android TV and its predecessor TVOS, Google TV, have more than doubled since the beginning of 2019.” Up from 10%, they now account for 20% of the European market. Their analyst called it a three-horse race in Europe between Google, LG (with it’s webOS software), and Tizen from Samsung. In North America, Roku remains the top operating system “natively installed into smart TVs, followed by Amazon Fire TV. However, Google is gaining ground, with expanded product availability. (NextTV: 9/22/22)

TVision’s “eyes-on-the-screen” technology shows that political ads are performing better than “other TV advertising” on measures of viewability and attention. Based on “viewing when someone is in the room while the ad is airing (“in-view” TV watchers), political advertising gets 25.3 seconds of ‘viewability’ versus 20.7 seconds for non-political TV advertising.” The highest attention numbers come people 55 years and older, with a score of 43% for political ads versus 38% for all other ads. Younger viewers (A18-24) pay closer attention to political ads (34.5%), scoring 12% higher than other advertising (30.8%). Check out the comments for additional insights (MediaPost: 9/27/22)

Ad tracking firm, AdImpact and campaign finance data indicate that the “2022 midterm elections are on track to be the most expensive ever as more than $6.4 billion is being poured into TV, radio and digital ads for U.S. House, Senate, gubernatorial and local races.” This figure already surpasses both the 2018 and 2020 election cycles, according to the non-partisan research company. They anticipate that the total will hit $9.7 billion by November’s election day. (CNBC: 9/26/22)

The Local Advertising Forecast by BIA Advisory reports that OTT is “the fastest growing local media channel”, predicted to jump to $2 billion in 2022 (up 57%) and expected to hit $3.4 billion in 2026. In comparison, over-the-air ad revenue, much larger at $20.4 billion in 2022, will grow at a slower rate to $21.9 billion by 2026. “The growth in OTT demonstrates that it is delivering a proven opportunity for broadcasters to grow revenue.” The report notes that OTT saw a large spike during the “main portion of the pandemic” and grew at 33% CAGR; with continued growth at 14.3% CAGR from 2022 to 2026. Researchers expect further increases as a result of political spending this year, as well as select verticals including supermarkets, fast-food restaurants, doctors’ offices, legal services, and fitness centers. (TV Technology: 9/21/22)

The Hollywood Reporter runs down the premieres, returns, and specials across broadcast, cable, and streaming. The new fall season extends into the coming week with over a dozen premieres on broadcast alone, including Ghosts, last season’s successful new comedy, the final season of The Walking Dead, and a fresh cast on Saturday Night Live. (THR: 9/28/22)