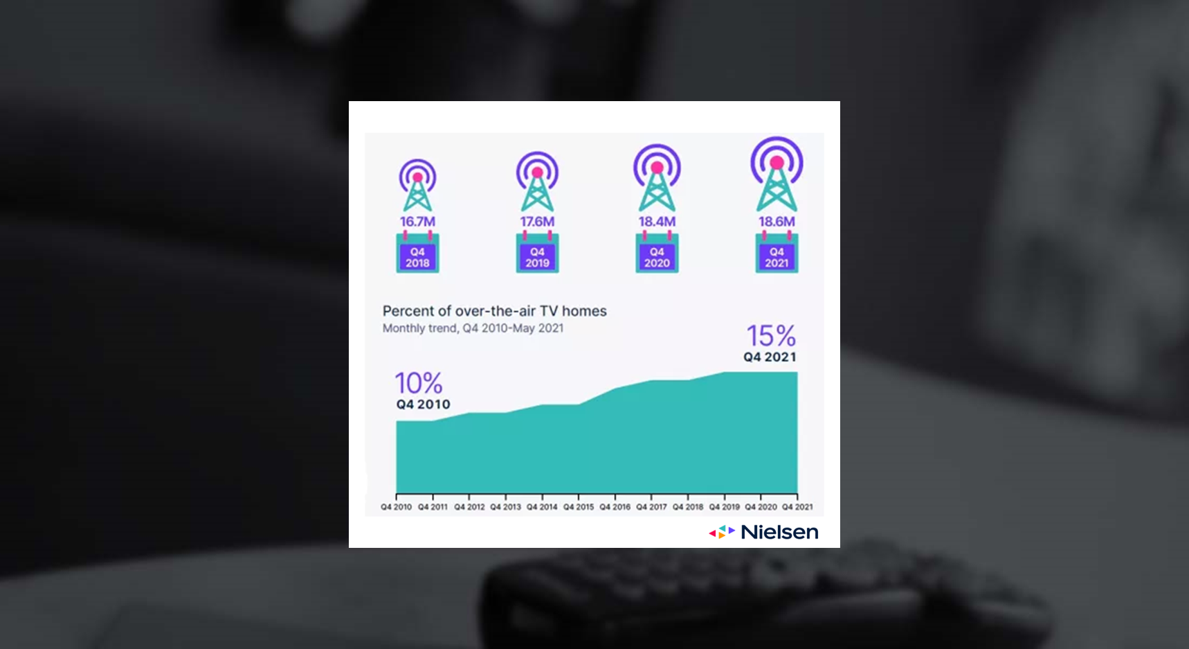 Nielsen’s latest Local Watch Report takes a close look at the increase in over-the-air TV households and their viewing behaviors. According to the analysis, titled “The Over-the-Air Evolution”, there are 18.6 million households (15.3% US), up 1% from a year ago and up 11% from 20210. This growth is in direct contrast to “the share of homes with cable, satellite, or telco pay-TV services” which has shrunk. The report also breaks out viewership three ways: households with OTA but no SVOD, OTA with SVOD (but no vMVPD), and OTA with SVOD (and with vMVPD). (NextTV: 4/21/22)

Nielsen’s latest report from The Gauge, looked at time spent with video during the month of March. While overall TV viewing and streaming declined last month, streaming’s share increased to nearly 30%. The overall decline “tracks with historical norms as consumers begin to ease into warmer weather”. Another reason for the decline from February was less sports viewing. Despite the NCAA basketball tournament and NASCAR in March, sports share of viewing was cut in half as February benefitted by the Olympics and post-season football. (Nielsen: 4/21/22)

Three megatrends are shaping the future of video advertising, according to Cross Screen Media’s Michael Beach. First, all screens will be bought and sold together. Second, all video will be bought and sold against audiences (it’s about 70% today). And third, advertisers will be placing more value on performance metrics vs. reach/frequency. In a presentation at Borrell Miami 2022, other big questions addressed include the size of the video market ($334 billion; 41% of US ad market), the importance of the local video ad space (41% of US video ad market), tracking consumer attention, challenges facing both buyers and sellers, and offers a prediction of what the future may look like. (Cross Screen Media: 2022)

In a bit of back-and-forth, shows that started on SVOD behind a streaming paywall, are getting a second life by airing on ad-supported networks. Conversely shows that started on ad-supported environments are moving to streaming; all in an effort  “to decide where their costs can be recouped and their profit potential best exploited.” Two shows that made the move from streaming to linear TV are The Flight Attendant (HBO Max) and Paris in Love (Peacock) which made their way to basic cable. (Mediapost: 4/20/22)

THE PRICE IS RIGHT

The long-running game show is celebrating its 50th anniversary this year. Over the weekend, the show was inducted into the NAB’s Broadcasting Hall of Fame, where host Drew Carey accepted the award, claiming that it (Could be around for 100 years … because it’s that strong.” In other TPIR 50th anniversary news, fans can follow the Price is Right Live “Come on Down Tour”, as the show makes its way around North America. (Deadline: 4/24/22)