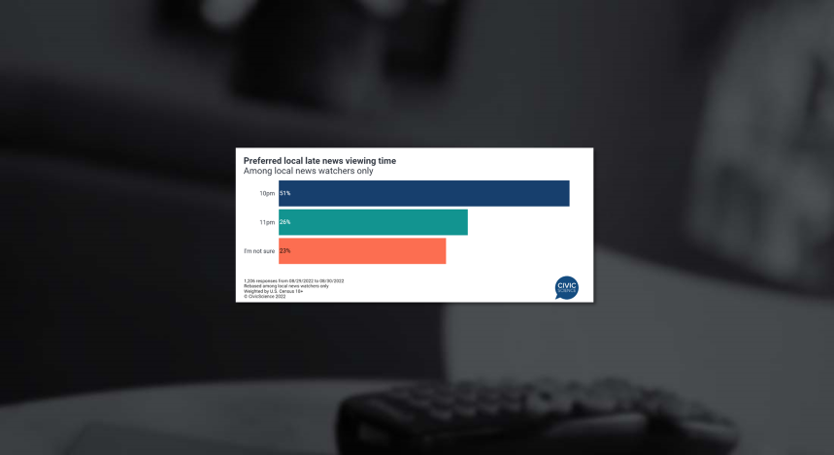 As NBC considers handing over its 10 pm hour to local stations, CivicScience took a close look at their proprietary data for insights on TV viewing habits and late news preferences. Just 19% of adult respondents “report they most often watch TV during the primetime (9-11 pm) slot.” Lifestyle changes, such as working remotely or hybrid, have been a factor in the decrease of late-night viewing because “those who work remotely are twice as likely to report watching TV during the day.”  However, “among local news watchers, the majority said they would prefer to watch local late news during the 10 pm slot, compared to 11 pm.” (CivicScience: 9/8/22)

According to a BIA Advisory Services blog post, “free-to-air broadcast television stands to earn nearly $4 billion in political dollars by the end of the 2022 cycle. Digital media is also strong,” but radio is “lagging – by a wide margin.” The BIA forecasts that TV OTA will reach the highest amount out of the three and “there Is still ‘significant headroom’ for growth in the final months leading up to the November elections.” Digital media is predicted to be nearly $2 billion in spending. When it comes to radio, it will “attract just $428,357,000 of the total multi-billion-dollar pie.” (RBR: 9/9/22)

According to Viamedia, an independent political ad sales management company, 63% of the political ads that they place are “issue”-oriented spending. This is up from “47% in each of previous cycles in 2020 and 2018 political election periods.” Issue-oriented political advertising includes PAC (Political Action Committees) for ballot initiatives and referendums on behalf of candidates. The largest category of spending behind issue-oriented advertising is “U.S. Senate campaigns with a 12% share. (MediaPost: 9/14/22)

A survey by fulfillment and transportation company, Radial Inc., found that “quick delivery is re-emerging among consumers as the holiday shopping season begins.” According to the report, one-third (33%) of respondents expect their delivery timeline to be two to three days for gifts ordered online. Comparatively, only 14% of those surveyed in 2020 expected that their online purchases be delivered within two days. However, looking back at 2018, 34% of consumers “expected to receive holiday packages in two days or less, indicating consumers have gone back to pre-pandemic expectations.” (Chain Store Age: 9/8/22)

Drew Barrymore started off her third season with an “emotional visit.” The host welcomed her ex, Justin Long, to her talk show where they embraced and discussed their past relationship. Barrymore and Long both expressed their gratefulness for their relationship which ended in 2010. Barrymore described it as “hella-fun” while Justin agreed, calling it “Fun chaos.” (Yahoo: 9/11/22)